Infestation with thorny bushes and infertile soil made it unwise to bet on the land, but Cuban farmer José Antonio Sosa shrugged off those apprehensions and brought the thriving La Villa farm to life on the outskirts of Havana.

“It was in very poor condition, covered in aroma (Vachelia farnesiana) and marabú (Dichrostachys cinerea), with little topsoil and lots of stones. People asked me how I was going to “get into it”. With an ax and a machete, I cleared the underbrush, clearing it in sections,” Sosa told IPS.

Now they alternate plots of different varieties of fruit, vegetables and tubers on the approximately 14 hectares that this farmer received in usufruct from the state in 2010, as part of a government policy aimed at reducing unproductive land and encourage food production.

These crops guarantee family self-consumption, in addition to contributing to social programs and sales to the community, having ceded part of the production to the credit and service cooperative Juan Oramas, owner of the farm located in the municipality of Guanabacoa, one of the 15 that make up the Cuban capital.

Supported by an assistant and his family, Sosa provides cow and goat milk, raises pigs and poultry, and already dreams of raising freshwater fish in a small lagoon in the not too distant future.

The Villa is in the process of being certified as a “sustainably managed farm”. The farm and Sosa represent one of the examples of a growing effort by small Cuban farmers to save degraded lands and integrate responsible soil and crop management.

The rescue of unproductive and/or degraded land is also linked to the need to increase domestic food security in a country heavily dependent on food imports whose rising prices maintain a domestic market with unmet needs and cycles of shortages such as the one current.

“The guideline provides for the implementation of new financial economic instruments or the improvement of existing instruments by 2030, in order to achieve neutrality in land degradation”: Jessica Fernández.

At the end of 2021, Cuba had 226,597 farms in its territory, including 1,202 with agroecological status and 64% of the total – some 146,000 – incorporated into the agroecological movement in the start or transformation categories, according to official statistics.

For Sosa, known as “Che” since childhood, the use of natural fertilizers and animal excrement has made a difference in the recovery and transformation of soils.

“It is also important to pay attention to how crops are grown or harvested, to avoid compaction,” the farmer said.

Studies recognize that changes in land use, inadequate agricultural practices (including intensive use of agricultural machinery and irrigation), increased human settlements and infrastructure, and the effects of climate change, are factors accelerating desertification and soil degradation in this Caribbean island. nation of 11.2 million people.

Sosa stressed the importance of paying attention to the direction of the land for planting and the use of live or dead barriers “so that when it rains, the water does not wash away the topsoil towards low areas”.

Cucumbers grown agroecologically at the La Villa farm, located in the municipality of Guanabacoa, one of the 15 municipalities that make up Havana, Cuba. Photo: Jorge Luis Baños/IPS

Covering an area of ​​109,884 square kilometres, 77% of the soils of this archipelago are classified as not very productive.

They are influenced by one or more unfavorable factors such as erosion, salinity, acidity, poor drainage, low fertility and organic matter content, or poor moisture retention.

The most recent statistics reveal that 35% of the national surface presents a certain degree of degradation.

But at 71, Sosa, who has worked in the countryside all his life, attests that climate change is a bad factor for soils.

“Rain cycles have changed. When I was a boy in the early 1960s, my father planted malanga (Colocasia esculenta, a locally eaten tuber) in March, around the 10th or so, and on the 15th it was raining heavily. This is no longer the case. This month of April was very dry, especially at the end of the month and the beginning of May,” he recalls.

He also referred to declining crop yields and quality, “as soils get warmer and water becomes scarce”.

Various studies on the subject corroborate significant changes in the climate of Cuba in recent years, linked to the increase in the average annual temperature, the decrease in cloud cover and stronger droughts, among other phenomena.

According to forecasts, the country’s climate will tend towards less precipitation and longer periods without rain, and by 2100 the availability of water potential could be reduced by more than 35%.

But more intense hurricanes, atmospheric phenomena that can dump half of the average annual precipitation in 48 hours, with consequent stress and severe soil erosion, are also expected.

Although the least productive land is in the east and Cuba’s so-called semi-desert is confined to parts of Guantánamo’s southern coast, the easternmost of the 15 provinces, forecasts suggest that semi-desert areas -arids could increase and move westward. . 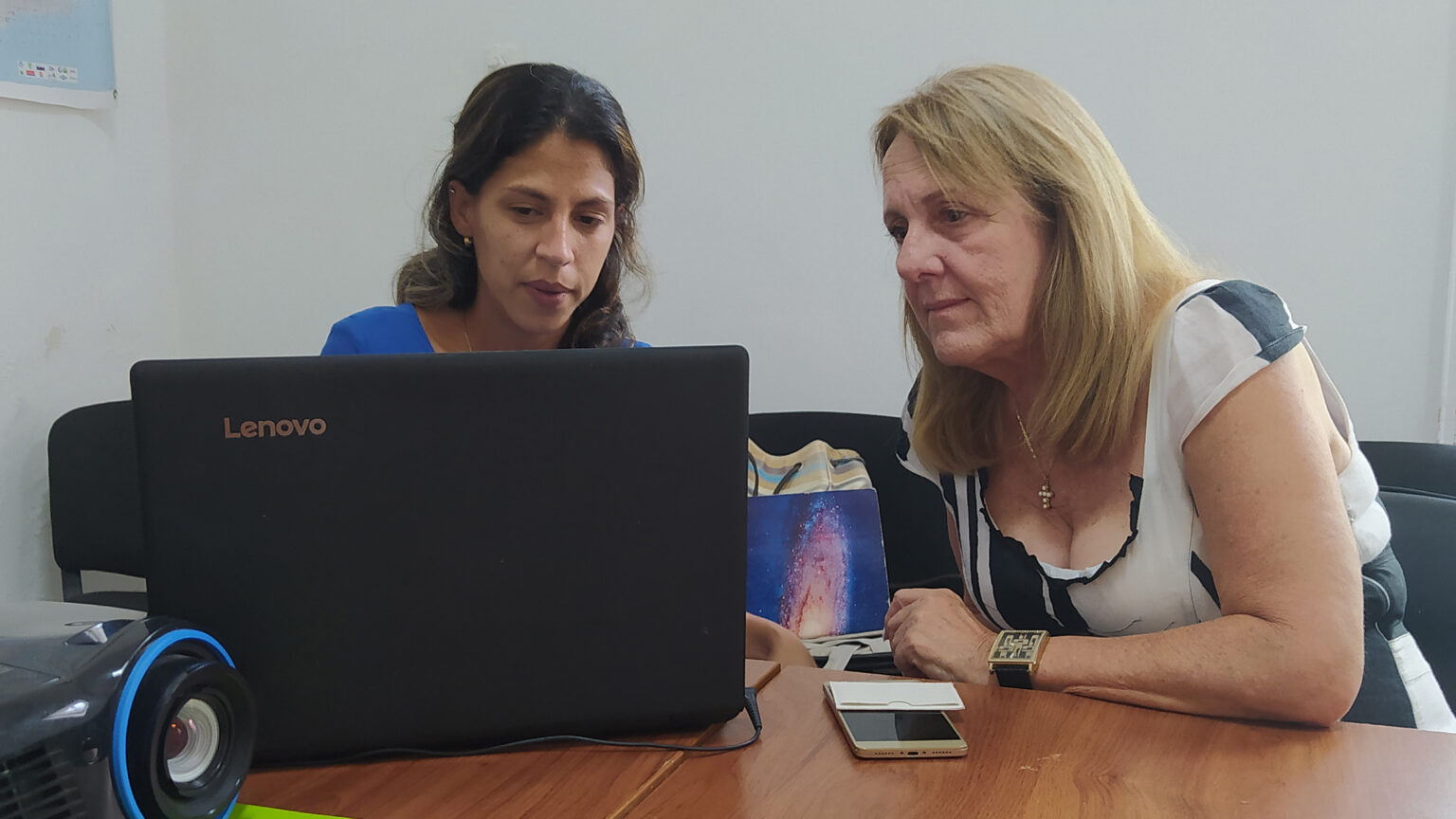 Gloria Gómez (right), director of natural resources, priority ecosystems and climate change, and Jessica Fernández, head of the climate change department of the general direction of the environment of the Cuban ministry of science, technology and l environment, confirm the government’s intention to promote the use of credits, insurance and taxes to encourage farmers to improve their soils. Photo: Luis Brizuela/IPS

The Cuban government is also committed to the 2030 Agenda and its 17 Sustainable Development Goals (SDGs), agreed at the United Nations in 2015.

In SDG 15, the one on the life of terrestrial ecosystems, target 15.3 calls to “combat desertification, rehabilitate degraded land and soil, including land affected by desertification, drought and floods and work to a world without land degradation”.

According to Sosa, the increase in soil degradation factors requires more efforts to restructure its physical and chemical characteristics.

In addition, he said, mechanisms should be sought to prioritize irrigation, given that many springs are drying up or dwindling in supply due to climate variability.

“In my case, I irrigate the lower part with a small system connected to the lagoon. But in the higher areas of the farm, I depend on rainfall,” he said.

The construction of reservoirs or cisterns to collect rainwater, in addition to traditional reservoirs, are ideal alternatives for this Caribbean country, with short and low-flow rivers, and highly dependent on more abundant rainfall. in the so-called rainy season. from May to October.

But the experiments of farmers like Sosa require greater incentives; there is a need for more training on the importance of sustainable management techniques, and their generalization to find economic returns, as well as financial and fiscal support.

The use of natural fertilizers and animal excrement is one of the keys to the recovery and transformation of the once degraded soils covered in thorn bushes of the current La Villa farm in the municipality of Guanabacoa, La Havana, Cuba. May 17, 2022. Photo: Jorge Luis Baños/IPS

“The directive provides for the implementation of new financial economic instruments or the improvement of existing instruments by 2030, in order to achieve neutrality in land degradation,” Jessica Fernández told IPS in an interview. Head of the Climate Change Department of the Ministry of Science, Technology and Environment. with IPS.

In this sense, it is intended to promote the use of credits, insurance and taxes as economic incentives for producers, based on the improvement and conservation of soils, and to account for current expenditure in environmental solutions in order to determine total expenditure on soil conservation, she added.

“We are in conciliation and studies with the Central Bank of Cuba to gradually introduce green banking,” Gloria Gómez, director of natural resources, priority ecosystems and climate change at the ministry, told IPS.

“This service will seek to promote and finance projects that provide solutions to environmental problems through credit with lower interest rates, longer repayment periods, incentives for green products and services and eco -labelling,” she said.

Over the past five years, the principles of sustainable land management (SLM) have been applied to more than 2,525 hectares, while one million of the country’s more than six million hectares of agricultural land have benefited from sort of advantage, according to statistics.

Other national priorities are related to the increase of the forest area to 33%, the extension of the areas under SLM by 150,000 hectares and the improvement of 65% of the soils in the agricultural zone by the end of the current decade.

The original article can be found here

Law must be amended to protect land with absentee owners, no heirs, says Goa CM